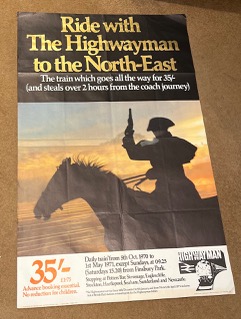 According to UK Finance, there was a 71% increase in APP fraud in the first six months of this year, reaching £355m1. The question is what does the future of costs look like. Let’s take a look at the latest results:

Before making a forecast (£XYZ) let’s reveal what has changed in the six months up to December 31st from the first six months of the year:

Going forward into 2022, there maybe more changes to prevent APP fraud, which could be enacted by the regulators. At this stage the same regulatory environment reminds in force for the whole of 2021.

As baseball’s Yogi Berra noted: “It’s tough to make predictions, especially about the future”. Therefore we would like you to make a prediction of the amount defrauded in H2 2021. To encourage participation the person who comes closest to UK Finance official figure realised usually 90 days after December 31 2021 will win an original Highwayman poster.

This original poster from British Rail issued in 1970 shows a Highwayman stealing two hour off the coach journey time by using the train. At the time of issue the UK was going decimal, hence the price in both old and new currency.  The engine outlined in the bottom right hand corner is a Class 40, a similar one being used in the Great Train Robbery in 1963.

Dick Turpin is probably the most famous UK Highwayman robbing stagecoaches around York in the 1730s. The Victorians romanticised Turpin’s activities and before COVID, a local phrase, ‘at least Dick Turpin wore a mask’ was used when someone was committing daylight robbery. Today fraudsters do not need masks as they are largely invisible thanks to the Internet, advanced technology and an understanding of trust psychology but they do need a bank account to take your money.